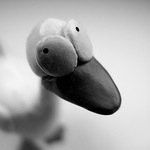 This month I took part in Digiwrimo, a 30-day writing challenge inspired by NaNoWriMo. Instead of writing a 50K-word novel in a month, participants had a goal of 50K digital words: tweets, Facebook status updates, emails, digital feedback on others' work, etc., etc.

The questions posed by the organizers, Jesse Stommel (@Jessifer) and Sean Michael Morris (@slamteacher), in today's #digiwrimo chat on Twitter included: "how do you measure success?" and "what did you learn from this experience?" This blog post is my attempt to answer those questions in a slightly more thoughtful and detailed manner than I did earlier today via 140-character tweets.

How do you measure success?
The simple answer to this question is: "meeting the goal of 50,000 words, obviously."

But a couple of people proposed that Digiwrimo was more about the act or process of writing rather than the product itself. @timothymerritt said that Digiwrimo, for him, "meant not worrying about polished, finished product. Gave me courage to just dive in."

I found this to be somewhat true for me in theory, but very little of the work I counted toward my 50K was work I'd normally refuse to show other people. Okay, yes, I did count some notes about works-in-progress, which are definitely not something I'd show to other people. And under normal circumstances I would not have published such a short blog post as "Update on Nov. weight loss goal." But there's something in me that fails to recognize this as success, per se. Just because these things are not as polished or complete as I'd normally like doesn't mean that it took less time to produce them. I only saved time in the editing/polishing phase, not in the writing phase.

I'm starting to make myself grumpy, so I'll move on from this point and just say that unless I hit my 50K words, it's not really going to feel like success to me. Maybe if the goal had been to write for a certain period time each day I'd be less focused on product and more focused on process, but it is what it is. (This is not at all to discount my fellow Digiwrimo-ers' experience, by the way. I am happy for them that the challenge got them to focus on process.)

What did you learn from this experience? 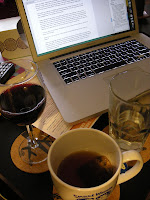 Community matters. It's partly about audience. I found it extremely helpful to have a dedicated audience to push my work out to, who would then re-tweet and/or respond to what I'd written. One particularly cool instance of this was when a poem I wrote inspired a fellow Digiwrimo-er, someone with whom I'd never interacted before, to write a poem in response. Love that.

But it's not only about audience. There was something really motivating about knowing that I wasn't in it alone. That there were other people--this whole community of people, in fact--who had taken the challenge and who were in it with me. We were all in it together, encouraging each other and patting each other on the backs when we reached significant milestones.

It's the same kind of motivation I get when I participate in #writeclub--a weekly, Friday-night writing challenge hosted by @FridayNightWrites on Twitter wherein participants join in 30-minute writing "sprints" and report out their word count and/or share selections of their writing. (I'm participating in it as I write this blog post, in fact, while occasionally chatting with other #writeclub members.)

I push myself until I burn out. The reason I'm almost 10K words behind on the last day of the challenge is because I spent the last two months working virtually non-stop and burned out toward the beginning of this week. I even wrote on Thanksgiving because I spent most of that weekend traveling and knew I'd get behind in my word count again. I can't keep working 10-14 hour days, seven days a week. I can't keep pushing. I have to rest sometimes and give myself a break. This is something I need to figure out for myself. December goal, perhaps. (I do so love timed goals.)

I have a habit of discounting or devaluing my work. The truth is that I've far exceeded the 50K mark for digital words this month. But the reason I'm behind in my word count is because there's a lot of work that didn't count. When I sat down to plan my Digiwrimo participation I knew I wanted to use the challenge to help me market myself--build a greater presence on Twitter and Facebook, publish more blog posts, do some free sample edits, etc.--and to produce creative writing. Therefore email wouldn't count. G-chat messages wouldn't count. Notes about my works in progress weren't supposed to count either, but I'm desperate, so I'm "cheating," which is really just another way of saying that I'm willing to make some exceptions to my strict rules and count more of my digital words than I originally intended to.

But not counting some of my digital words is just one example of ways in which I discount my work. It's part of a bigger pattern I've noticed over the last couple of months. Perhaps it comes from this mild sense of panic over being self-employed and not having a steady income. Nothing I ever do seems enough to make me feel productive, even when I work 10-14 hours per day, seven days a week. Someone recently asked me, "What would be enough?" I came up blank.

Conclusions
I wish I had something very deep and academic to say about digital writing, as many of my fellow Digiwrimo-ers do, but I don't. Nevertheless, I did learn several things that are important to my writing process and my sanity: I need writing community; I need rest on occasion; I need to figure out how much is enough. These lessons are significant to me, and (I hope) will have a significant impact on my work moving forward.