On (not) writing every day: an emerging process 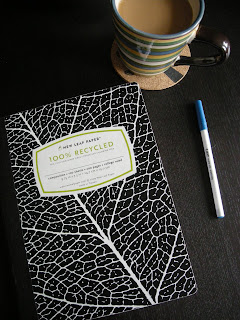 One of the consistent pieces of advice for writers that I've found on writing blogs and in books about writing is this: Write every day.

God that sounds exhausting. I mean, when I was in that creative non-fiction class last spring, I took my notebook to bed with me every night and jotted down notes or freewrote by hand for 30-60 minutes. (And actually that led to jotting down notes all throughout the day, because once that tap was opened the words just kept flowing, like people streaming into Target on Black Friday...because it was really about validating those little thoughts when I had them, and once I began doing that, more thoughts/ideas rushed in to be validated.) I'd take the notebook to bed with me every night, but it was only once a week that I'd sit down with that notebook and my laptop and start constructing a creative non-fiction piece by throwing all the bits and pieces that seemed to go together into a Word doc, adding some stuff to make it flow better, and then calling it a draft.

I took notes every day, but I only really wrote once a week. Writing feels different from jotting down random thoughts. Writing is the act of trying to construct a coherent piece. An actual draft of something rather than a smattering of only-possibly-related ideas and images. At least, that's what feels like writing to me.

But the thing is that once the class was over, I stopped taking that notebook to bed with me every night. Once I no longer had external motivation (an assignment), my newly-formed habit fell to the wayside. I tried it a few times, but nothing came.

Over the last three months I've tried all sorts of tricks to get myself to write. Have written at different times of day, have tried setting assignments and not setting assignments, have tried working according to a firm schedule and taking a far more flexible approach. I *think* (knock on wood) that I'm finally beginning to find my rhythm...which of course happened by complete accident rather than through this quasi-methodical trial-and-error process. (Why do I bother? Sigh.)

One evening during my dinner break I found myself sitting on the couch with my notebook in my lap. I don't remember why. I was listening to my thoughts, and every so often I'd write down an image or a sentence or a phrase. Just little bits and pieces that came to me. Afterwards, I realized I was recreating that experience of "taking notes" I'd had during the creative non-fiction class. It was exciting. So the next day I did it again. And the day after that.

I'm thinking this might actually work. I can take notes during the week and sit down on Saturdays to write my speculative fiction pieces as my plan for ROW80 dictates. At first I thought this approach could really only work for short pieces, nothing above five pages or so. But then I realized that longer short stories and novels are made up of interrelated scenes, and a scene is a short piece in its way, so maybe it could work for longer pieces too. Something to test out.

But the point I'm trying to get to is that I won't be writing every day. Not in the way I think of writing. And I think that might be okay. In fact, I'm just going to say that I'm giving myself permission to not write every day, and it is okay. So there.

And there's something else I want to say about that, which will come as no surprise to regular readers of this blog: it bugs me to no end that there are all these damned rules out there for how to be a writer the right way. I don't believe there's a magic writing bullet that works for everyone. And I have to wonder how many people give up because they don't have the time or patience to find out what does work for them. And how many people read these books or blogs about writing and try out the advice and it doesn't work and so they figure they must not be "real" writers? How many people read the oft-repeated common wisdom that "real writers write because they don't have a choice; they are compelled to do it," and think that means that real writers are inspired all the time and it comes easily for them and they don't have to work at it, and so when it's hard work they think it must not be something they're meant to do? (Grrr. GRRR!)

Back to this idea of process, though. I'm curious about other people's processes. How often do you sit down to actually write (as opposed to jotting down notes or brainstorming about the outline or characters or plot)? Do you tackle shorter projects differently from longer projects?