With only a few days left in the round, I'd normally be thinking ahead to my goals for the next round. I generally like thinking about the starts of new things; I haven't screwed anything up yet, and anything is still possible. But right now I can't think about anything beyond a week from today, which is my self-imposed deadline for having a first draft of my novel finished.

This time last week I was panicking. The previous few days had brought low word counts and I didn't see how in the world I was ever going to finish this book on time. But then I visited Denise D. Young's blog, wherein she spoke of Rachel Aaron's book 2K to 10K. The timing was right; I was desperate to figure out how to write faster, which is exactly what Aaron's book is about. I started reading it and figured, "What the heck. I'm not usually a plotter, but it's worth a shot."

I'm not going to give you Aaron's secrets; those are hers to sell. But I will tell you what I like best about her approach: It doesn't hinge on telling herself to quit being lazy and just get over it and just do it already. Nor does it hinge on talking herself out of feeling what she's feeling about her book. Instead she sees her low word counts or reluctance to write as a red flag that there's something that isn't working in what she's trying to write.

It was scary to take a good, hard look at my brain-child this week and say, "Are there parts of this that I'm not excited about writing?" and give myself the honest answer, "Yes, several parts," and then dig in and figure out what wasn't working for me about them. But I'm so glad I followed Aaron's advice and did that because now I'm so much more excited about the book I'm writing. Hooray! (The brain-child is the novel, in case that wasn't clear.)

The true test, of course, is still coming. Will having done the prep work Aaron suggested lead to higher word counts this coming week? I'll let you know next Sunday. But even if it doesn't, I honestly think following her system was worthwhile just for the pay-off of being excited about my book again.

And now for the ROW update: 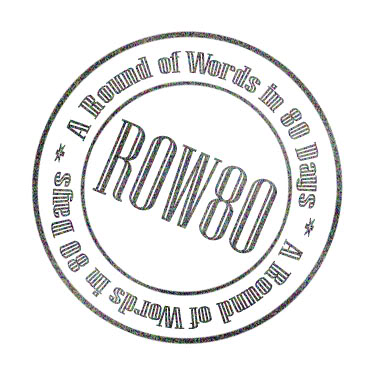 Writing - Work on WIPs, 3 blog posts/week, submit - PARTIALLY MET. Worked on the WIP 4 hrs/day and made really satisfying progress. Added about 10K words to the ms and potentially set myself up to write faster this coming week by using Rachel Aaron's 2K to 10K system. Published 2 blog posts. Nothing submitted.

This is a blog hop! Click here to read other ROW80 participants' check-ins.

Email ThisBlogThis!Share to TwitterShare to FacebookShare to Pinterest
Labels: #writeclub, 2K to 10K by Rachel Aaron, A Round of Words in 80 Days, writing, writing process