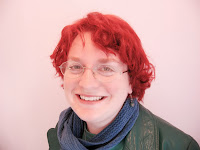 Several weeks ago I was gripped by a new nonfiction book idea. The problem was that I'd need some money up front, which meant I'd need to sell the idea to a publisher before I'd actually written the book...and I had no idea how to do that. So I did what many writers in my situation would do: I went to Twitter for help.

And this is how I met Gill Hoffs, a sassy Scottish vegetarian living in England with her husband and young son who writes maritime nonfiction, among other things. Gill was not only the only one who answered my plea for help that day, but she also followed up via email and has offered her continued help as I continue to think about pitching this book idea.

In a nutshell: Gill is awesome.

And so it is with great pleasure that I bring you an interview with her this week, not only because it gives me the opportunity to introduce you to this wonderful human being and her work but also because she has something to teach us (or at least me) about how to pitch nonfiction. Hurrah!

Your first nonfiction book, about the RMS Tayleur, is coming out in January, no? Tell us a bit about it.
The Sinking of RMS Tayleur: The Lost Story of the Victorian Titanic is about the plight of almost 700 people heading for the Australian Gold Rush in 1854, whose ship sank two days after leaving Liverpool, England. Read more here.

Will you tell us a bit about your process for pitching that book? What were all the pieces you needed to gather/write in order to be prepared to pitch? How much research did you have to do for the proposal, and how long did it take to write the proposal?
I had a long email conversation with the editor at Pen & Sword, over several months, and initially sent a short piece for her to read over, then a sample chapter, synopsis (approx. 300 words) and chapter plan.  I didn’t need to do much more research for the proposal as it mainly duplicated what I was doing for the book.  The proposal itself took a few days as I was checking sections with writer friends.

How much time did you spend researching publishers to pitch to?
Not long, to be honest.  When my friend sent me a link to a call for submissions (similar to this - they're currently looking for more history proposals), I'd only written a short nonfiction piece on the wrecking of the Tayleur, which is included in "Wild: a collection" (Pure Slush Books).  She knew I was still researching the tragedy as I'd been posting titbits on Facebook and getting drawn deeper into the story, and the link provided the impetus for me to put together a pitch and email Pen & Sword.

I Googled them first and realised I already had some of their books and enjoyed them, looked about online to check out their online presence (was it amateurish and full of misspellings? Phew, no!), and see if there were any warnings on sites like Preditors & Editors or blog posts by disgruntled authors or ex-employees.  I also asked an experienced friend and he spoke of them in glowing terms.

Did you have an agent to help you through the process? If yes, how did you find said agent?
No, no agent.  There are many fine agents out there who will help find nonfiction projects the right home.  Some are keen on memoirs, some are more interested in cookery books and How To..., and many like history.  But there are also many reputable publishers with good track records and connections with bookshops who can not only turn an idea into a beautiful, well-edited book, but get it into stores too.  And many of these accept or outright encourage would-be authors to get in touch directly with their ideas, whether they have experience in writing or not.

How many publishers did you pitch to before the idea was accepted?
One - Pen & Sword, who were enthusiastic about my idea from the start.  If they had said no I had a couple of other publishers in mind who had produced similar books which I'd read and enjoyed long before I thought about my own - it's always wise to have a backup plan.
Did you know people who knew people, or was it an unsolicited submission?
It was an unsolicited submission, but a friend who knew I'd been writing a short piece on the Victorian Titanic had seen a guest blog by an editor at Pen & Sword encouraging people to pitch to her, and sent it to me via Facebook - I can't emphasise enough how important social media is for writers, by the way.  It's been integral to my career.

What are the keys to a successful pitch?

Professionalism, brevity, relevance.  Waffle should be kept for the dinner plate.  Your aim in every single interaction you have with people in the writing industry is to make their job as easy as possible, so be quick and put it concisely.

Type things properly, never use textspeak, and read your pitch aloud to check for repetition and sentences you find yourself automatically rewording in a shorter way then revise.

The main question you should ask yourself while writing your pitch is why - because that's the main question you'll be asked at this stage.  Why this as a subject?  Why in this format, not another e.g. why write the shipwreck story so it reads almost like a novel instead of a textbook?  Why you - do you have academic credentials, professional experience, a unique (and saleable) viewpoint, or a link to someone involved in the event/industry/field?  Why now - is there an anniversary approaching (my book will be released in the week before the 160th anniversary of the shipwreck) or some kind of event kindling interest in the news?  Why, especially if there are other books covering similar topics (you need to know what else has been written on the subject and work out what you're doing differently), would somebody buy this?  Why might someone criticise it?

Follow the guidelines provided to the letter even if they contradict what you've read on advice sites or what your fellow writers say.  Keep it tight and remember your pitch reflects your book-to-be but it also reflects you.

What unexpected challenges did you encounter during the process of writing the proposal & pitching your first nonfiction book idea? What did you learn about the process that you wish you'd known before you started?
Pen & Sword’s proposal process is relatively straightforward, and their questions are specific instead of vague, which is always useful.  Jen Newby, who I queried, was very supportive throughout.  The biggest challenge I had at this stage was an IT issue that meant my emails weren’t getting through to her so there was this horrible silent limbo for a while before I phoned the office (after several nudge emails) to see if all was well.  I learned to be more confident in myself and persevere even while I cringe!

What's your next book going to be about?
I’ve a novel out on submission with agents at the moment, a mix of Lord of the Flies and Jaws, and I’m researching for a maritime thriller about the Mary Celeste.