It's not about not being enough 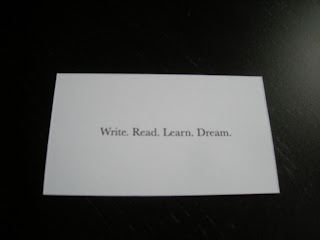 A friend of mine who recently broke up with her boyfriend keeps asking herself, over and over, "What's wrong with me? Why wasn't I enough?"

One of my clients recently auditioned for a musical, got a call-back, and felt she nailed it. And then didn't make the cast list. I imagine her asking herself similar questions.

Several years ago, though, I realized that it's not about not having been enough, and it's not necessarily about having done something wrong. I can bring my A-game, be my most awesomest, and it still might not work out. Because it's not about me being "enough" or "right," it's about what they need at this time in their life. It's about fit.

I've known this for a while, but it was only today that it occurred to me to apply this philosophy to my writing, too. Or rather, more specifically, apply it to myself when my writing gets rejected. Maybe sometimes it's not that my poem or story isn't good enough to get published; maybe it's about fit.

I'm not trying to say that everything I write and say and do is brilliant. Just like sometimes I say/do things in relationships that I don't feel good about, some of what I write is distinctly not brilliant. (Heck, some of it might even be anti-brilliant.) Sometimes the process of writing a piece is really fun, but later I look back on it and don't like it so much. It just doesn't speak to me like it did in the moment of creating it.

But the moral of this story is that, when my poem/story/essay is rejected, I want to be open to the possibility that it is worthwhile and just hasn't found the right audience yet. It's not necessarily that I've done anything wrong or that the writing is bad or the idea stupid; it's that it didn't connect with that editor at that time.

Do I have a right to feel disappointed? Hell yes. But instead of trying to figure out how to write how/what I think other people want me to write (because we all know already that everyone wants different things), I want to ask myself, "Do I like this piece? Does it do what I want it to? Am I amused/moved/fascinated/entertained/whatevered by it?" If yes, then instead of wallowing in feelings of self-doubt and insufficiency, I want to keep trying, keep submitting.

And if all else fails, if I've submitted it to every market for which I think might be a good fit and it keeps getting rejected but I still like it, then I can always publish it myself. Or at least pin it up on my wall.