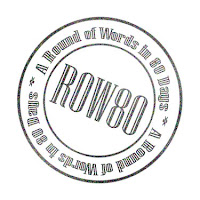 Last week I couldn't bear to post a check-in because I had once again failed to produce anything. Why is it so easy to be motivated to read and respond to other people's writing and yet so difficult to produce writing of my own? Perhaps because the writer has the more difficult job. Not that editing doesn't have its own skill set--it does--but there's much less of my ego involved in editing. And I already think of myself as a proficient editor. I don't know that I'll ever think of myself as a proficient writer.

But enough psychology. Today I am happy to be able to report that I actually wrote something this week: a "shitty first draft" (as Anne Lamott calls it in Bird by Bird) of that magical realism short story I got the idea for when I was sick. I'm feeling rather guarded about it because I like the premise so much and think it might be somewhat original, so no excerpts for you this week.

Also this week I emailed the partial drafts of the other three speculative fiction stories I've been working on to a colleague of mine. ("Partial drafts" = missing a beginning, middle, and/or ending.) I think I needed some professional feedback in order to revive my interest in them. I've been rather sick of them. Or maybe just frustrated with myself. At any rate, this colleague was luckily willing to do a trade, so I got some good feedback on one of my stories, and she promised to read the other two soon. And after talking with her I was able to do some more work on the story she'd read. Hooray!

We're already entering Week 5 of this Round of Words in 80 Days. According to my original plan I should be done with first drafts of all five stories by the end of this week, but I don't see that happening. I'd have to finish three more drafts and write a whole new one. But I'd be happy if I had two more completed drafts by the end of this week. I'm *so close* on some of them, but trying to write the missing pieces feels like trying to squeeze water out of a rock.