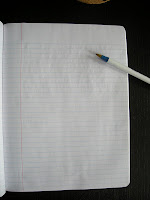 I had a deadline, but the stories wouldn't come.

Getting to butt-in-chair in itself was a challenge because I had so many other things going on. And every time I sat down to work on the stories it was like trying to squeeze water out of a rock. On a good day, I could write several paragraphs *about* the story - who the characters were, what I wanted to the story to do, what I thought the narrative arc should look like - but very little of the story itself. Writing these stories was taking a ton of effort, and to show for all that effort I had maybe a few sentences. It made getting to butt-in-chair even harder.

Being an indie author has its perks: I moved the deadline. But they still wouldn't come. Feeling discouraged, feeling like a failure, I moved the deadline again. And again. Still next to nothing. A flash of dialogue or scene here and there; I'd get excited, sit down to write more, but nothing more would come.

Clearly the stories were in there, or else those flashes of inspiration wouldn't happen. I set up a preorder, thinking that maybe an external deadline would be the kick in the pants I needed. A not-so-subtle message to my Muse to get her shit together.

It didn't work. I had to move the release date. But I could only do it once. Now I had a hard deadline. Two weeks left. One week left. Still the stories weren't coming.

By now I was desperate and depressed. Not the best combination for creative work. I seriously considered giving up on the stories altogether, even though I really didn't want to.

Four days before the final deadline I was hiking Mt. Tabor with my dog. I'd chosen a steep path, a mix of gravel and dirt. As I baby-stepped it up the hill I realized: this is what writing these stories feels like.

On occasion, I'll have moments where writing feels like racing down a hill: thrilling and nearly effortless. These are the moments of inspiration I live for, the kind that deliver a natural high.

But this writing project - the short stories - was an uphill hike: I had to take smaller steps, it was more effortful, and I covered less ground in the same amount of time. As I continued walking uphill, I realized that a big part of my problem was that I was expending a lot of energy being frustrated with how effortful it was and how long it was taking. But it didn't have to be that way.

I chose Option 3. I decided that, for the next four days, I would show up and just do the best I could. Instead of aiming for 500 words in a 30-minute writing sprint, I'd aim for 250. I be happy with 250, and if I wrote fewer, I'd accept that and not beat myself up over it. In fact, I'd give myself permission to write by hand, since writing by hand is slower and more effortful than typing.

It worked. Not only did I start producing, but it also felt less effortful because I wasn't wasting all that energy on fighting with myself. I made my deadline (barely, but still), and - most miraculous of all - I actually liked my stories. Winning!